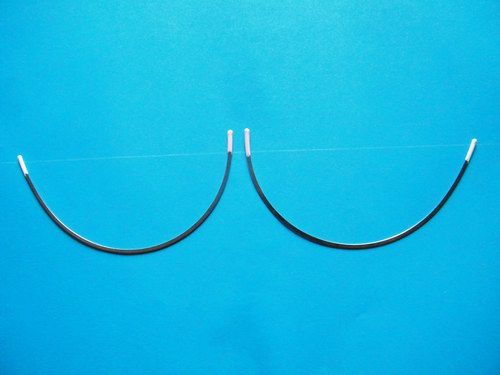 Exposure to underwire metal can result in immediate health problems in two different ways, which are cuts and punctures, and rashes and skin irritation. When a metal underwire breaks, it can have a very sharp point or edge, which can easily poke through the surrounding fabric. Given the right timing or positioning, that sharp edge can cause serious cuts, or even penetrate deep into the skin and surrounding tissue. Alternatively, if the metal of the underwire is exposed by wear and thinning of the material that surrounds it, the metal itself can cause varying degrees of skin problems. Sometimes, this is due to an allergic reaction to a metal that is in the underwire, especially if the underwire contains nickel.

Recently, with the increasing use of Automatic External Defibrillators (AED’s) in emergency situations where someone has gone into cardiac arrest, there has been growing concern about the safety of using a defibrillator on someone who is wearing a metal underwire bra. Specifically, there are rumors that the electric shock delivered by the defibrillator will be conducted through the metal of the underwires, causing severe burns, or even lighting the bra on fire. However, the actual risk of being injured in this way is very small. For there to be any risk at all, the metal of the underwire must be exposed, so that it can make contact with the skin, and that means that the bra must be damaged. Also, an exposed underwire will only conduct electricity from the defibrillator if the paddles are placed in the wrong location, making them closer to the underwire than they should be if the defibrillator is to function properly. Finally, although AED’s are now common in public places and may sometimes be used by people who are not medical personnel, the majority of AED use is by paramedics, who are trained to cut away a woman’s bra before using the defibrillator.

There is a pervasive myth that says that wearing an underwire bra will give you breast cancer, and it remains firmly a myth, without basis in medical fact. The origin of this misunderstanding comes from the book Dressed to Kill, published in 1995 by Sydney Ross Singer and Soma Grismaijer, a couple of anthropologists. The authors, who are not medical doctors, claim that wearing an underwire bra restricts drainage of fluid in the breast tissue through the lymph nodes, and therefore marinates the breast tissue in toxins. The problem is that these authors did not arrive at their conclusion on the basis of any medical study, and they exhibit a fundamental lack of understanding of the lymph system. The lymph nodes that handle drainage of bodily fluids from the breasts are located in the armpits — and so drainage is upward and toward the arms, not downward past the underwire. In other words, a bra underwire can’t prevent your body from draining toxins from your breast tissue, because an underwire doesn’t cut off or restrict anything relevant to lymph function.

Another rumor making the rounds of the Internet suggests that the pressure from bra underwires has a negative effect on the wearer on the basis of acupuncture or acupressure. This belief is fueled primarily by ideas from an article called “Chinese Lessons For Modern Chiropractors” by Dr. George Goodheart, who was a Doctor of Chiropractic, and not an MD. Essentially, the idea that the pressure from a metal underwire is problematic for reasons of acupressure assumes a belief in bodily “meridians” and an insubstantial life force called qi, or chi, which flows in these supposed pathways, the existence of which is not recognized by mainstream medical science. Therefore, the question of whether or not metal underwire bras inhibit the flow of qi is not a matter that is recognized by mainstream medicine.

So, why are there so many different concerns about why underwire bras might be dangerous? Why are there so many myths and misconceptions mixed in with the genuine medical issues, and why is it so hard to tell them apart? The reason is surprisingly simple: Women wear bras every day. A bra is an important, basic garment, relied upon almost universally, and underwire bras are very common. If such a common, basic item could hurt you, and especially if it could somehow put your life at risk, it would be horrifying. Women are terribly vulnerable to any dangers posed by their bras, and so any real risks take on an emotional charge, while myths about other potential risks grow into urban legends. But dealing with the issue is mercifully easy. Just make sure your bras fit properly, discard a bra that is worn or breaking, and don’t buy underwire bras if you are worried about them — Knix is a great option for comfy underwired bras.”