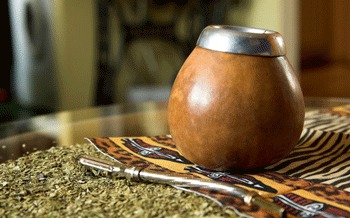 Yerba Mate, or Mate as it is often called, is a South American herb from the holly shrub of the South American rain forest. It grows wild in Argentina, Chile, Peru, and Brazil, but is most abundantly in Paraguay where it is also cultivated. Drinking Mate is a longtime traditional social activity in Mexico, Argentina, Uruguay and Paraguay – family or friends pass around a “gourd” (fist-sized, round wooden ball-like cup) of the brew (just hot water and Mate leaves & stems), sipped through a “bombilla” (which translates to “little pump” or “straw”), often made of silver or bamboo. It’s brewed in similar fashion other teas or even coffee in this sense; just hot water and the source, so it can also be easily brewed in a french press, tea ball infuser, tea pot with tea holder area, and similar methods if you don’t happen to have a traditional gourd handy.

In South America, Yerba Mate has been revered for centuries as the “drink of the gods” and is still drunk daily for health, sustained energy and mental clarity by millions. The leaves of the rainforest Mate tree naturally contain 24 vitamins and minerals, 15 amino acids and are rich in antioxidants – with reported ORAC antioxidant levels even higher than many brewed green teas. Many Mate advocates cite the Pasteur Institute and Paris Scientific society which in 1964 concluded, “it is difficult to find a plant in any area of the world equal to mate in nutritional value” and that yerba mate contains, “practically all of the vitamins necessary to sustain life.”

But one of the main draws is Yerba Mate’s reported health benefits. Vendors claim it can, “boost immunity, restore youthful hair color, retard aging, combat fatigue, control the appetite and eliminate insomnia,” to name a few.

But is it all true? The answer is that there is still comparatively little comprehensive scientific research on the long-term effects of Mate consumption. But the nutritional constituents of the plant are real and verified, as are ORAC antioxidant levels thanks to some ORAC testing, and thus it’s likely that Mate does provide large, complex range of antioxidants as well as nutrients and amino acids, as widely reported. Just as with Matcha green tea or high-quality organic coffee beans, the source must be as pure as possible in order to derive maximum benefit: in this case, rainforest shade-grown Mate, consumed straight (no added sugar or milk or other diluting elements). And like Matcha, teas and coffees, the strength of the brew will also affect the resulting amount of nutrients.

From an antioxidant profile standpoint, and 8 oz. serving of Mate compared to an 8 oz serving of brewed sencha green tea shows that Mate’s ORAC level is indeed almost twice that of both brewed green tea and coffee, however high-grade Matcha green tea and ground Sencha can still eclipse Mate (and coffee) on the ORAC scale depending on source and brewing strength (and contain some different components at different levels, which have given green tea its own deserving praise, most notably EGCG and L-Theanine).

Oh, and there is caffeine in Mate…although some Mate proponents insist that the form in Mate is slightly different and worthy of its own name, “Mateine”, providing almost identical effects but without the caffeine jitters. Others argue that it’s the same caffeine as in other teas, but thanks to the synergistic combination of balancing nutrients, the net effect is far different from coffee.

Sounds great, but what about the downside? The fact is that despite Yerba Mate’s recent popularity climb, comparatively little is known, scientifically, about the long-term effects of regular consumption. But many studying Mate’s historical traditional usage have found numerous examples of peoples who thrived nutritionally, and experienced impressive longevity, despite otherwise poor diets and access to other staples of nutrition. This supports the reports of Mate’s nutritionally rich profile.

There have been a few past anecdotal reports of liver toxicity associated with Mate, but there appears to be no conclusive findings nor other problems that one would assume to accompany such a dramatic increase in consumption around the world (not to mention the many centuries of Mate drinking in South America). To the contrary, Mate’s only apparent downside is that it does contain caffeine (or mateine, for purists), which for some can be problematic even in amounts smaller than present in coffee. Frankly, compared to the garbage that so many people commonly drink as their day-long beverages, one can only imagine how the health problems of society at large would change if Yerba Mate (and Matcha green tea, white teas, Rooibos, and other excellent options) were the norm rather than the exception.

Despite its healthy reputation, numerous research studies have linked regular drinking of yerba mate with increased risk of cancers of the mouth, head and neck, esophagus, bladder, larynx, kidney, and lung and non-Hodgkin’s lymphoma (NHL). Yerba mate drinking is most consistently associated with esophageal cancer. Some studies suggest that it is the very hot temperature at which yerba mate is typically consumed that increases esophageal cancer risk, rather than yerba mate itself.

Other research supports that yerba mate naturally contains carcinogenic (cancer causing) compounds, and this is the reason why the drink is linked with increased cancer risk. Two research programs that evaluate carcinogenic activity of hundreds of chemicals, mixtures, and natural substances are the International Agency for Research on Cancer (IARC) Evaluation of Carcinogenic Risks to Humans and the US National Toxicology Program’s Report of Carcinogens. The information from these agencies places yerba mate in the category of having a moderate level of evidence of posing a cancer risk to humans.

The Latest on Yerba Mate

A recent study aimed to provide more concrete information about this topic by carefully examining both hot and cold preparations of mate. The researchers wanted to determine whether yerba mate contained a group of compounds called polycyclic aromatic hydrocarbons. Polycyclic aromatic hydrocarbons (PAHs) are classified as carcinogens which means they are substances that are known to cause cancer in animals and humans.
Beyond looking for PAHs, the researchers wanted to know how much of these compounds are in mate. This is important because many foods and beverages contain small amounts of PAHs. These trace amounts of potentially cancer-causing chemicals typically do not cause any health problems. In larger quantities however, they may cause damage in the body that will increase cancer risk over the long term.

The researchers looked for levels of 21 different PAHs in eight commonly used commercial brands of yerba mate. They examined PAH levels in the mate leaves and in tea, prepared both hot and cold, from the leaves. As mentioned, many things we eat and drink can contain some PAHs, so the researchers also checked PAH levels in green tea leaves for comparison purposes.

However, they did determine that if prepared in the traditional way and consumed in amounts typically enjoyed by South Americans who drink mate, the intake of certain carcinogenic PAHs was comparable to what a person would get by smoking a pack of cigarettes per day. The study authors noted that the comparison with cigarette smoking is supported by other research that shows that urine levels of the breakdown products of PAHs are similar after smoking cigarettes and after drinking mate.

Scientists still disagree about the bottom line on yerba mate, says K. Simon Yeung, clinical coordinator and research pharmacist at Memorial Sloan-Kettering Cancer Center in New York City. The tea does contain a long list of vitamins, minerals and antioxidants, including B vitamins and vitamin C; manganese, potassium and zinc; and the beneficial plant compounds quercetin, theobromine and theophylline.

Because of yerba mate’s high antioxidant content, comparisons to green tea are common (one commercial yerba mate blend claims to contain 90% more antioxidants than green tea). But that is slightly misleading, says Elvira de Mejia, associate professor of food science and human nutrition at the University of Illinois at Urbana-Champaign.

The two teas have very different arrays of antioxidants: Green tea is rich in epigallocatechin gallate compounds, while yerba mate’s main antioxidant is chlorogenic acid. Studies have suggested that both sets of plant compounds have the potential to reduce risk for heart disease and cancer, but the research on both is far from conclusive.

Lab tests have suggested a host of benefits from yerba mate. In test tubes, the herb and its components reduce oxidative stress on heart and liver cells, protect DNA from damage in yeast cells and kill human liver cancer cells. In lab rats, the tea improves the flow of blood through blood vessels and reduces fat accumulation.

But Yeung, who also manages Memorial Sloan-Kettering Cancer Center’s “About Herbs, Botanicals & Other Products” website, cautions against drawing conclusions from such studies. For one thing, he says, “high antioxidant content doesn’t always translate into a health benefit. . . . We can’t rely on consumption of antioxidants as a safe way to prevent cancer” or other diseases.